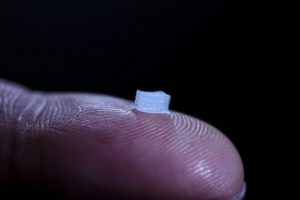 Spinal cord injuries can have an effect on other functional areas of the body. Researchers have designed a device which could combine treatment techniques that could restore function to uninjured areas of the body. Combining neuronal stem cells and 3d printing to create an implantable device that would be able to grow new nerve cells re-establishing connection between damaged cells on either side of the injury.

Spinal injuries can be like downed power lines – even if everything on either side of the injury is perfectly functional, the break can effectively shut down the whole system. Now, researchers at the University of Minnesota have designed a device that could link everything back together again. A silicone guide, covered in 3D-printed neuronal stem cells, can be implanted into the injury site, where it grows new connections between remaining nerves to let patients regain some motor control.

A damaged spinal cord is a difficult injury to patch up, but there are treatments in development. Gene therapy could help break down scar tissue and regenerate nerve cells. In other cases the injury site is bypassed altogether, rerouting messages from the brain through computers or sending the signals wirelessly to a device implanted in the lower part of the body.

The new treatment could be a mix of both approaches. The Minnesota team started by collecting induced pluripotent stem cells – a type of stem cell that’s derived from adult cells like skin and blood. Once these were bioengineered into neuronal stem cells, the researchers were able to 3D print a device made up of alternating layers of silicone scaffold and neuronal stem cells.

This device could then be implanted at the site of a spinal injury, where the guide nurtures the stem cells until they’re able to grow new nerves, connecting the undamaged cells on either side of the injury.

“This is the first time anyone has been able to directly 3D print neuronal stem cells derived from adult human cells on a 3D-printed guide and have the cells differentiate into active nerve cells in the lab,” says Michael McAlpine, co-author of the study. “3D printing such delicate cells was very difficult. The hard part is keeping the cells happy and alive. We tested several different recipes in the printing process. The fact that we were able to keep about 75 percent of the cells alive during the 3D-printing process and then have them turn into healthy neurons is pretty amazing.”