Stem cell therapy is increasingly becoming a more common option in the medical field. Physicians suggesting it as an alternative treatment as well as an additional tool in surgeries for chronic problems like degenerative disc disease or spine injuries. In the below article originally from Chicago Health, a patient with a spinal injury was treated using a spinal fusion procedure which included an innovative use of stem cell therapy to promote new bone tissue growth. This procedure was part of a stem cell therapy study, where the physician thought the success rate of the innovative procedure would be similar to that of the standard spinal fusion procedure, where bone is grafted from the pelvis or hip to fuse the vertebrae. 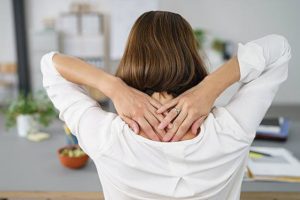 Sifting through claims to find the benefits

Jessica Roby was used to pain. As a former gymnast and diver, she had learned to live with it.

“It’s not that I didn’t take it seriously, but being an athlete, you’re in pain a lot because you’re in training. Sometimes, it’s difficult to differentiate between that and something more serious,” Roby says.

Then, one morning as Roby got out of bed, she heard a pop in her neck followed by intense pain that radiated down her left arm and felt as if she had dislocated her shoulder. For the next three weeks, she couldn’t turn her head or use her arm for even the simplest tasks, such as opening a door or carrying her purse.

But Roby’s arm wasn’t dislocated. Multiple orthopedic surgeons confirmed that she was experiencing nerve impingement from herniated discs in her cervical spine, as well as degenerative disc disease in her neck. After learning about each surgeon’s approach, Roby chose Mark Mikhael, MD, an orthopedic spine surgeon at NorthShore University HealthSystem and Illinois Bone & Joint Institute, to oversee her treatment.

In addition to a spinal fusion, a typical treatment for herniated cervical discs, Mikhael had proposed an innovative stem cell therapy. A standard spinal fusion treatment involves removing the discs that are causing friction or nerve compression between the vertebrae and using bone from the pelvis or hip to fuse the vertebrae. But instead of bone, Mikhael planned to use proteins from donor stem cells to promote new bone tissue growth between Roby’s fused vertebrae. The approach is part of a study that Mikhael is conducting on the use of donor stem cells in spinal fusion surgery.

In general, stem cell therapies are most common in blood and bone marrow transplantation. Physicians also use stem cells to treat blood and immune system disorders and to rebuild the circulatory system after some types of cancer treatment.

However, research into stem cell applications for bone, skin and eye injuries and diseases is growing. Demand for stem cell therapy among spine patients is increasing, too, especially as more people learn about the benefits.

Mikhael began using donor stem cell products in his cervical spinal fusion patients in 2016. He published the results of his initial study — the first of its kind not funded by a stem cell product company — in the June 2017 issue of Asian Spine Journal.

Original article can be found on Chicago Health.