What is Lumbar Microdecompression?

In a microdiscectomy or lumbar microdecompression spine surgery, a small portion of the bone over the nerve root and/or disc material from under the nerve root is removed to relieve neural impingement and provide more room for the nerve to heal.

A lumbar microdecompression is typically performed for a herniated lumbar disc and is actually more effective for treating leg pain (also known as radiculopathy) than lower back pain.

Impingement on the nerve root (compression) can cause substantial leg pain. While it may take weeks or months for the nerve root to fully heal and any numbness or weakness to get better, patients normally feel relief from leg pain almost immediately after a microdiscectomy spine surgery.

How Lumbar Microdecompression Surgery Is Performed

A microdiscectomy is performed through a small (1 inch to 1 1/2 inch) incision in the midline of the low back.

Importantly, since almost all of the joints, ligaments and muscles are left intact, a lumbar microdecompression does not change the mechanical structure of the patient’s lower spine (lumbar spine). 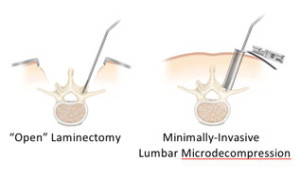 A lumbar microdecompression is typically performed for a herniated lumbar disc and is actually more effective for treating leg pain.

In general, if a patient’s leg pain due to a disc herniation is going to get better, it will do so in about six to twelve weeks. As long as the pain is tolerable and the patient can function adequately, it is usually advisable to postpone back surgery for a short period of time to see if the pain will resolve with non-surgical treatment alone.

If the leg pain does not get better with nonsurgical treatments, then a lumbar microdecompression is a reasonable option to relieve pressure on the nerve root and speed the healing. Immediate spine surgery is only necessary in cases of bowel/bladder incontinence (cauda equina syndrome) or progressive neurological deficits. It may also be reasonable to consider back surgery acutely if the leg pain is severe.

Lumbar Microdecompression is typically recommended for patients who have:

However, after three to six months, the results of the spine surgery are not quite as favorable, so it is not generally advisable to postpone lumbar microdecompression surgery for a prolonged period of time (more than three to six months).

Usually, a lumbar microdecompression is performed on an outpatient basis (with no overnight stay in the hospital) or with one overnight in the hospital. Post-operatively, patients may return to a normal level of daily activity quickly.

Some spine surgeons restrict a patient from bending, lifting, or twisting for the first six weeks following surgery. However, since the patient’s back is mechanically the same, it is also reasonable to return to a normal level of functioning immediately following this spine surgery.

There have been a couple of reports in the medical literature showing that immediate mobilization (return to normal activity) does not lead to an increase in recurrent lumbar herniated disc.

The success rate for lumbar microdecompression spine surgery is approximately 90% to 95%, although 5% to 10% of patients will develop a recurrent disc herniation at some point in the future.

A recurrent disc herniation may occur directly after back surgery or many years later, although they are most common in the first three months after surgery. If the disc does herniate again, generally a revision lumbar microdecompression will be just as successful as the first operation. However, after a recurrence, the patient is at higher risk of further recurrences (15% to 20% chance).

For patients with multiple herniated disc recurrences, a spinal fusion may be recommended to prevent further recurrences. Removing the entire disc space and fusing the level is the most common way to absolutely assure that no further herniated discs can occur. If the posterior facet joint is not compromised and other criteria are met, an artificial disc replacement may be considered.

Recurrent herniated discs are not thought to be directly related to a patient’s activity, and probably have more to do with the fact that within some disc spaces there are multiple fragments of disc that can come out at a later date. Unfortunately, through a posterior lumbar microdecompression spine surgery approach, only about 5 to 7% of the disc space can be removed and most of the disc space cannot be visualized.

Following a lumbar microdiscectomy spine surgery, an exercise program of stretching, strengthening, and aerobic conditioning is recommended to help prevent recurrence of back pain or disc herniation.

As with any form of spine surgery, there are several risks and complications that are associated with a microdiscectomy, including:

However, the above complications for lumbar microdecompression spine surgery are quite rare.