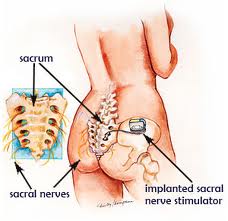 Sacral chordoma is a rare malignant tumor arising from remnants of the notochord. Due to its propensity for recurrence, the treatment of choice is surgical resection. Orthopedic and neurosurgical literature describe bladder dysfunction as prevalent in these patients, specifically urinary incontinence, however urologic literature is lacking in the exact nature of this dysfunction. Thus far, Sacral Nerve Stimulation (SNS) has not been described as a treatment option for these patients.

We describe a 36-year-old female who underwent midsacral resection (S3 and below) for a sacrococcygeal chordoma. She suffered from postoperative urinary incontinence and incomplete emptying requiring intermittent catheterization. Urodynamic evaluation showed detrusor hyporeflexia with nonobstructive urinary retention. She underwent InterStim(®) (Minneapolis, MN) placement resulting in return of spontaneous voiding and resolution of retention.

Sacral Nerve Stimulation has been FDA approved for treatment of non-obstructive urinary retention since 1999. It has yet to be described as an effective treatment option in patients who have undergone sacral resection and suffer from prolonged postoperative non-obstructive urinary retention. Operative reports may not contain sufficient detail to confirm whether one or both S3 nerve roots are intact. Thus, it is mandatory to perform a bilateral nerve evaluation to verify integrity of the S3 nerve roots in this cohort of patients. This can present a technical challenge, as some of the usual landmarks are surgically absent. However, we have shown that the procedure is feasible and effective after partial sacral resection.