What is Phantom Limb Pain?

Phantom limb pain is pain that feels like it’s coming from a body part that’s no longer there. Doctors once believed this post-amputation phenomenon was a psychological problem, but experts now recognize that these real sensations originate in the spinal cord and brain.

Although phantom limb pain occurs most often in people who’ve had an arm or leg removed, the disorder may also occur after surgeries to remove other body parts, such as the breast, penis, eye or tongue.

Most people who’ve had a limb removed report that it sometimes feels as if the amputated limb is still there. This painless phenomenon, known as phantom limb sensation, may rarely occur in people who were born without limbs.

Phantom limb sensations may include feelings of coldness, warmth, or itchiness or tingling — but should not be confused with phantom pain. Similarly, pain from the remaining stump of an amputated limb is not phantom limb pain. By definition, phantom limb pain feels as if the pain comes from a body part that no longer remains.

Characteristics of phantom limb pain include:

The exact cause of phantom limb pain is unclear, but it appears to originate in the spinal cord and brain. During imaging scans, such as magnetic resonance imaging (MRI) or positron emission tomography (PET), portions of the brain that had been neurologically connected to the nerves of the amputated limb show activity when the person feels phantom limb pain. 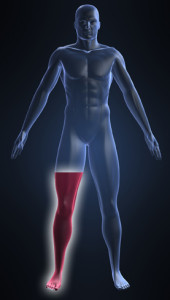 Phantom Limb Pain refers to ongoing painful sensations that seem to be coming from the part of the limb that is no longer there. 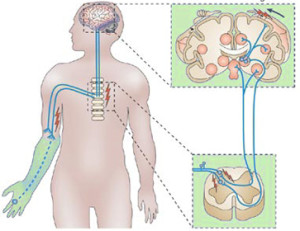 Some people experience other sensations such as tingling, cramping, heat, and cold in the portion of the limb that was removed.

Many experts believe phantom limb pain may be at least partially explained as a response to mixed signals from the brain. After an amputation, areas of the spinal cord and brain lose input from the missing limb and adjust to this detachment in unpredictable ways. The result can trigger the body’s most basic message that something is not right: pain.

Studies also show that after an amputation the brain may remap that part of the body’s sensory circuitry to another part of the body. In other words, because the amputated area is no longer able to receive sensory information, the information is referred elsewhere — from a missing hand to a still-present cheek, for example.

So when the cheek is touched, it’s as though the missing hand also is being touched. Because this is yet another version of tangled sensory wires, the result can be pain.

A number of other factors are believed to contribute to phantom limb pain, including damaged nerve endings, scar tissue at the site of the amputation and the physical memory of pre-amputation pain in the affected area.

Although there’s no medical test to diagnose phantom limb pain, doctors can identify the condition by collecting information about your symptoms and the circumstances, such as trauma or surgery, which occurred before the pain started.

Describing your pain precisely can help your doctor pinpoint your problem. Even though it’s common to have phantom limb pain and stump pain at the same time, treatments for these two problems may differ.